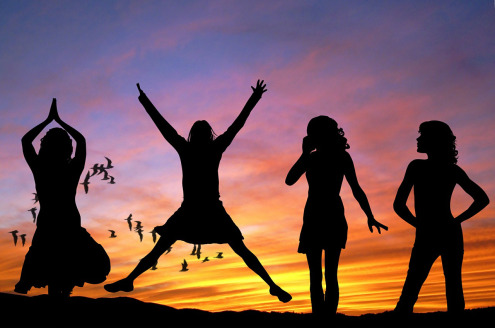 It was one of those beautiful days full of sunshine and I walked down the street to meet some friends for happy hour. It was a good day. A breezy, relaxed day. A day for friends.

As I walked down the sidewalk I came to a group of guys crowded together – the sort that could be described as “upstanding” looking, if we were going to use those empty kinds of descriptives – and they were laughing and having a good time. A day for friends, after all.

Wanting to move easily on my way, I quietly spoke as I came to them, “Excuse me.”

“Show us your tits and we’ll let you pass!” one of them shouted.

My shoulders tightened. I didn’t take a precious second to look to see who said it, but pushed through these laughing men surrounding me. Not stopping. Not looking. I just kept walking.

This memory came to me as I read the recently exposed words of one of our presidential candidates. Words that described harassment and assault with laughter and entitled bravado. Words of violence that were met with assured murmurs of agreement.

Beautiful daughter of God, you are created in the image of God – your laughter, your smile, your tenderness, your resilience, your joy, your sorrow. You move with God’s love and care on your shoulders. From the crown of your head – whether straight or curly, loc’d or buzzed – to the soles of your tired, weary feet, you are a blessing of God’s own making. You are God’s echo in the world.

You are like the women of Scripture. You are Hagar – who was cast out into the wilderness by her child’s father and whom God protected and promised to build nations from. You are Vashti – who told the most powerful leader in the land, “no” – and you are Esther – who took what little choice she had and gambled her life for others. You are the unnamed woman, outcast and alone, who took a risk, grabbed the garment of Jesus in the midst of a crowd, and was healed. You are Mary, who Christ called by name and made a first witness to God’s kingdom, before any other disciple.

You are beloved. While those words of violence are condemned or brushed aside as “locker room talk,” you may still be left with the memory of words spoken or actions done to you. I hope you know that those words and those actions are NOT okay. I hope you will know with stronger clarity and with greater conviction, that you are beloved. You are the image of the divine.

God’s Echo in the World

4 thoughts on “God’s Echo in the World”

Loving God… Loving Each Other!