The apostles gathered around Jesus, and told him all that they had done and taught. 31He said to them, ‘Come away to a deserted place all by yourselves and rest a while.’ For many were coming and going, and they had no leisure even to eat. 32And they went away in the boat to a deserted place by themselves. 33Now many saw them going and recognized them, and they hurried there on foot from all the towns and arrived ahead of them. 34As he went ashore, he saw a great crowd; and he had compassion for them, because they were like sheep without a shepherd; and he began to teach them many things. 35When it grew late, his disciples came to him and said, ‘This is a deserted place, and the hour is now very late; 36send them away so that they may go into the surrounding country and villages and buy something for themselves to eat.’ 37But he answered them, ‘You give them something to eat.’ They said to him, ‘Are we to go and buy two hundred denarii worth of bread, and give it to them to eat?’ 38And he said to them, ‘How many loaves have you? Go and see.’ When they had found out, they said, ‘Five, and two fish.’ 39Then he ordered them to get all the people to sit down in groups on the green grass. 40So they sat down in groups of hundreds and of fifties. 41Taking the five loaves and the two fish, he looked up to heaven, and blessed and broke the loaves, and gave them to his disciples to set before the people; and he divided the two fish among them all.42And all ate and were filled; 43and they took up twelve baskets full of broken pieces and of the fish. 44Those who had eaten the loaves numbered five thousand men.

45 Immediately he made his disciples get into the boat and go on ahead to the other side, to Bethsaida, while he dismissed the crowd. 46After saying farewell to them, he went up on the mountain to pray.47 When evening came, the boat was out on the lake, and he was alone on the land. 48When he saw that they were straining at the oars against an adverse wind, he came towards them early in the morning, walking on the lake. He intended to pass them by. 49But when they saw him walking on the lake, they thought it was a ghost and cried out; 50for they all saw him and were terrified. But immediately he spoke to them and said, ‘Take heart, it is I; do not be afraid.’ 51Then he got into the boat with them and the wind ceased. And they were utterly astounded, 52for they did not understand about the loaves, but their hearts were hardened. 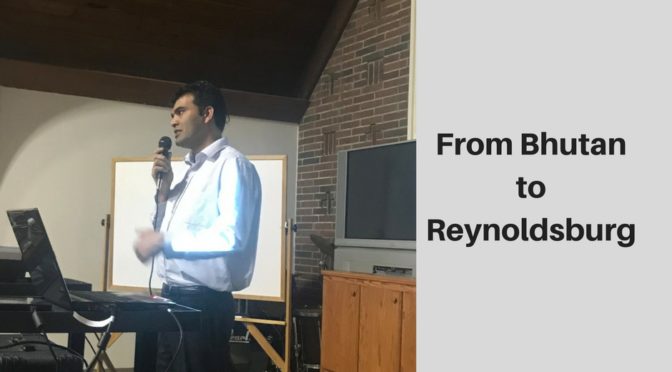 We were honored to have Bhuwan Pyakurel join us for “Messiah Night” to talk to us about the history and experiences of Bhutanese refugees in our community.

END_OF_DOCUMENT_TOKEN_TO_BE_REPLACED

Loving God… Loving Each Other!